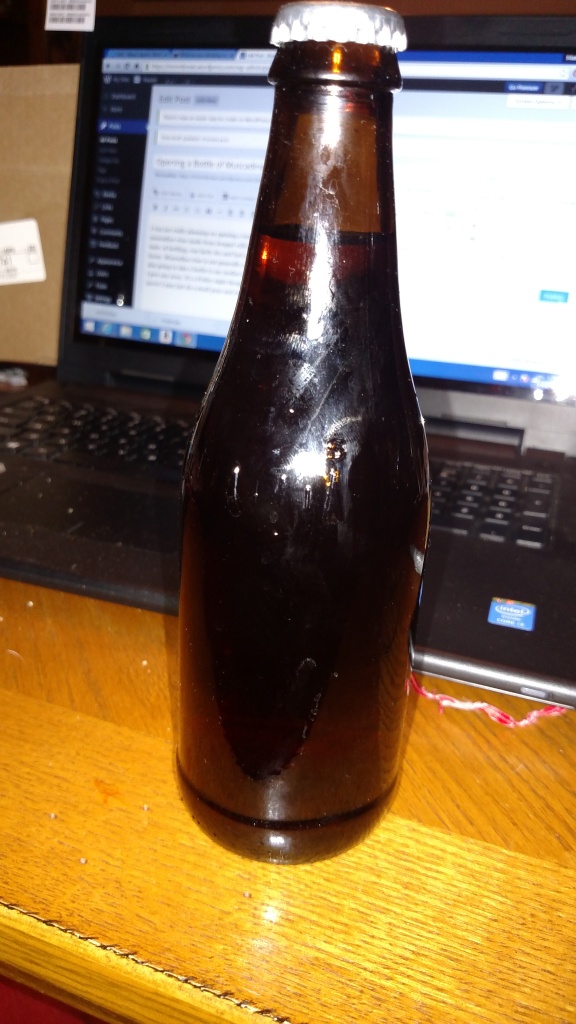 I was not really planning on opening a bottle of my first wine until at least August and maybe Thanksgiving. It’s a muscadine wine made from foraged wild grapes. Now, this isn’t the typical Southern sweet muscadine wine. A previous taste, at bottling, was fairly dry and had a nice deep blush color with a light body. With a 16.01% ABV, it was a little boozy. Muscadine wine is not generally considered a wine to age indefinitely, so I just decided I want to try one. I’m also going to take a bottle to my mother to try and she’s almost 85 years old…so why wait!? But I want to try it before I give any away. It’s a Friday night though…and I’ve been drinking beer…so 12 oz of 16% ABV wine might be a wise move! I may just do a small pour and recap and refrigerate the rest. The wine was started on August 20th of 2014 when I picked the wild grapes. Bottling was about 2 months later, on October 22, 2014. The wine has been in the bottle for about3-1/2 months. 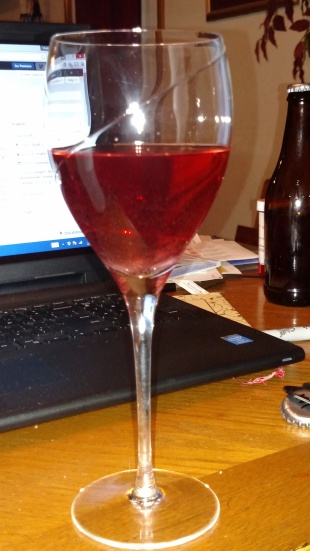 So…after a small pour, swirl, smell and taste…dang! Not bad! I don’t think I would be able to identify this as a muscadine wine. Perhaps a person with a trained palate could. It’s still a little young, maybe. I’m not a wine person. I have some experience with Reislings and Rhine wines from Germany…a little Merlot, a little Syrah, Cabernet Sauvignon…but not to the point that I would consider myself competent to critique any wine. My best attempt would be to say that it’s still a little boozy up front, but the aroma and the finish are pretty nice. I’ll see what Mom thinks…and then I’ll seek some more opinions this Fall. Cheers!