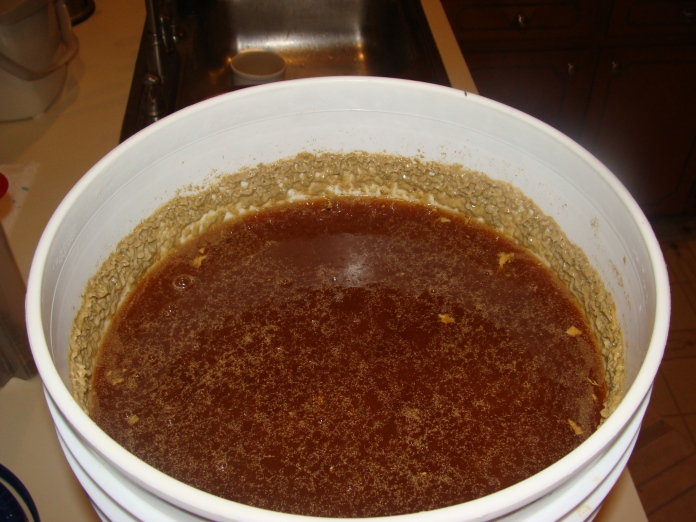 Last night and today, I haven’t seen any activity. I’m not convinced that it has finished fermenting yet, though, so I took a SG reading and it’s at 1.031 (corrected from 1.030 @ 74.3F). According to the recipe, it should make it to 1.023 to finish, so I’ll let it keep going. It’s only been 4 days since brewing. I don’t need to be terribly concerned with fermentation being quite done in primary, however, because it will go into secondary with more pumpkin, spice, and a vanilla bean (soaked in vodka). The sugar in the pumpkin could cause a little more fermentation, so I’m planning on giving it plenty of time. Then, I’ll probably do a tertiary for final clearing.

The hydrometer sample has gone into the refrigerator for a look at how it clears, color and flavor…later, but a small taste yielded a very nice flavor that I am quite pleased with, so far. 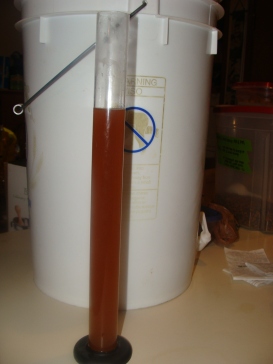 My ciders and muscadine wine continue to condition. The crab apple/pear/Cripps blend actually still has some airlock activity in primary, so another week? Probably. 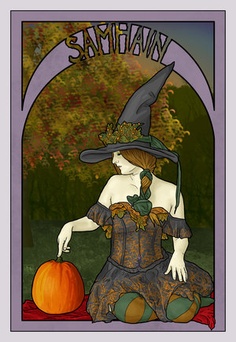 Samhain label…no artist to credit, but it’s beautiful! Not for sale, so I guess it’s okay.

After I picked up a new oxygen canister and some bags of ice, I set up for brewing my Scottish Pumpkin Ale that I’m calling “Samhain”, which is the Celtic version of Halloween and is pronounced “so-win”.

The recipe is a modification of a Scottish Ale recipe from a member at www.Homebrewtalk.com. I put the recipe together like this (but note the changes as I brewed!):

393 B cells required (Guess…I have no experience calculating this.)

***So, there were a couple of issues that required some changes. The efficiency that was the default in the recipe builder for Brew in a Bag (BIAB) brewing was 34%  and I evidently get double that.

Set up for a rigged “sparge”. Seems to do the job.

After the mash, I had an SG of 1.075, which was already better than projected and I had not yet added the 3 lbs of DME I thought I would need to add to the boil…so I omitted it entirely.

The process went smoothly. If anyone is interested, there are other posts that go through the process. The color is really nice! 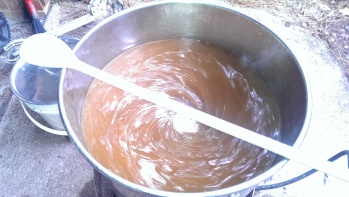 Sorry the photos aren’t better…*someone* took my camera to use at a Demi Lovato concert and didn’t bring it back in time. I had to use my phone’s camera. I did chill the wort down to 76F, using an ice bath. 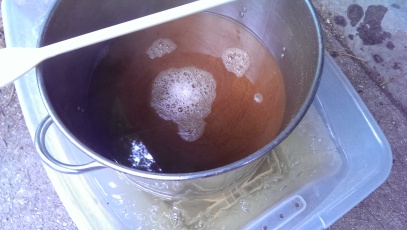 Then I pulled a sample, oxygenated the wort for 2 minutes using a sanitized oxygen canister and “oxygen stone” set-up and pitched my Edinburgh Ale Yeast (that I harvested from a previous batch of cider). I had prepared a starter for the yeast in advance and it was very active. I don’t have experience with “pitch rates”, but I believe I have plenty of yeast cells for the job. Since the volume I wound up with is about 6 gallons, in a standard fermentation bucket, and I have seen this yeast ferment very aggressively, I went ahead and set up a blow-off tube  to keep from fouling the airlock.  The yeast was pitched around 5:10 pm. As of 9:45 pm, I’m hearing a little action in the blow-off tube.

Now, aside from the process, let’s talk about the sights, smells, and flavors! I made my own pumpkin pie spice blend, using cinnamon, cloves, ginger and nutmeg. I did freshly grate the nutmeg. Also, the ginger has been around along time, so I supplemented it with a little grated fresh ginger. I roasted a can of Libby’s Pumpkin, spread on some parchment paper, on a baking sheet, at 425F for about 30 minutes. It wasn’t particularly pretty, but it picked up a few dark spots from caramelization and lost a lot of water. I kept the pumpkin in a sanitized storage container until I was ready for it.

The wort took on a great brown color with a dark orange-ish shade to it. Really nice! And the aroma and flavor from the pumpkin and spices are very good, too. I think this is going to be a VERY good beer.

Using the hydrometer sample, the OG came in at 1.083 and, if the attenuation rate is accurate, the ABV will be 7.91%; however, in my experience, the SG isn’t going to stop at 1.023…so, the ABV will likely be over 8%. And, this sample was also the basis for the flavor and color evaluations.

An update on the ciders and muscadine wine: the wine is basically bulk aging and clearing nicely. I’ll eventually rack it…maybe a couple more weeks, and let it go a few months, before I bottle it. The Caramel Cider made with crab apples and Cripps apples is pretty much bulk, aging as well. It did have a little airlock activity going on for a while after racking…not regular or often, though. It has almost stopped now, I think, so I’ll probably rack that a final time in about a week. Maybe bottling in two weeks. The crab apple, pear and Cripps apples cider…no name for it yet…is still bubbling pretty regularly in the airlock. It probably won’t be bottled for a month.

I think I’m learning that it pays to take a little extra time. Excess sediment in the bottom of bottles seems to be messing with my carbonation after bottles have been around for a couple of months. And I like my ciders to have very good clarity…not as huge a deal for all beers, but some. (For instance, wheat beers are actually supposed to be a little hazy.) So, slow down…get it right. Give it another week. It can only help!

Update: 9/15/14  Getting very good action in the blow-off on the Samhain Pumpkin Ale. It hasn’t fouled and it isn’t quite what I have heard some describe as “Rhino farts”, but it is almost constant bubbling.

Update:  9/15/14  Opened the test bottle of the caramel cider to see what it’s doing. No carb at all. The ABV is a hefty 10.89%, though and the flavor is nice. Color is good. Finished product will be more clear.  Alcohol may have pushed the Edinburgh Ale yeast past its tolerance…may have to explore options, if I want to carb.