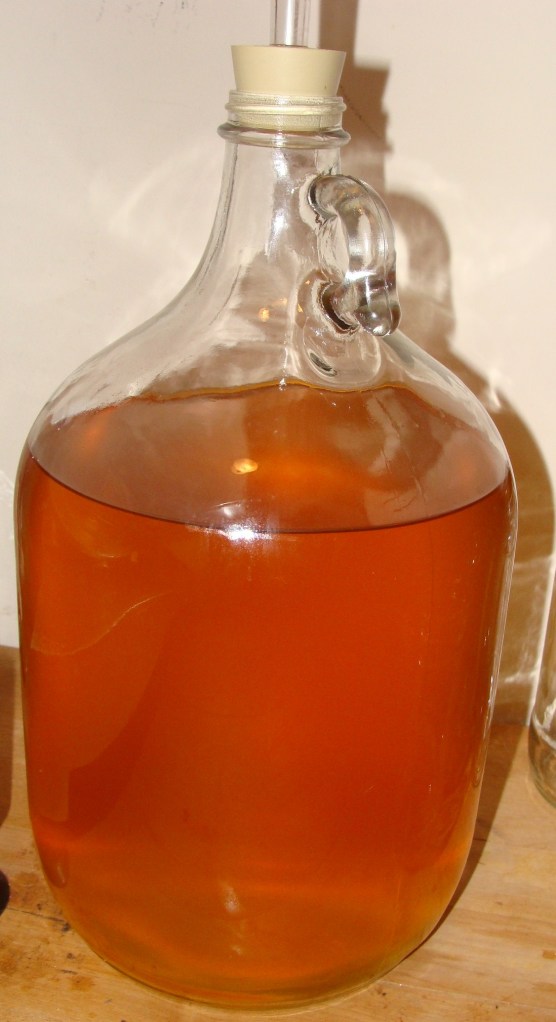 The Pineapple-Mango Melomel cleared quickly after the last racking, a few days ago. It looked like the right time to rack it off the rest of the sediment and begin the longer bulk conditioning in a one gallon glass carboy.

I was pretty careful to keep the racked melomel nice and clear. The issue, though, is that the volume in the carboy is down to the shoulder. I really don’t want to have that much head space for a long time. I did siphon off another pint and I covered it and stuck it in the refrigerator to see how it looks when it settles.

a pint that needs to settle and see if it’s worth trying to salvage any to add to the carboy.

If it looks worthwhile, I will try to carefully pour it off into another sanitized  container. If I’m successful with that, I’ll add it to the carboy through a sanitized funnel. That should reduce the head space considerably. If that does NOT work out, I’ll seek suggestions from some experienced mead makers online. Adding water is probably not a good idea. Maybe re-rack to a half gallon carboy and a smaller bottle or two? We’ll see in a day or two. The Murray’s Super Easy Cider #3 continues to slowly progress through primary fermentation. Update: evening, same day. The Pineapple-Mango Melomel the I had in a pint jar in the fridge cleared, so I poured it off and added it to the carboy.

I also did some reading and it sounds like adding a little water to close the head space is acceptable. I sanitized a glass measuring cup and used it for the transfer of the additional melomel…then I sanitized it again and used bottled water to top off the carboy. The amount of water added was only about a cup, so it shouldn’t really affect the SG/ABV much at all.