Opened strawberry blonde to add DME wort. (I drew off the gallon for DME boil from the spigot.)

A busy day today. On the recommendation of some people on http://www.homebrewtalk.com, I decided to make a run back to the brew shop and get some dry malt extract (DME) to bump the specific gravity of the strawberry blonde and plain blonde brews that I did yesterday. The specific gravity was 1.034 at 75F (1.035)…well below the target of 1.053. I’ve done this enough now that I think I’m taking the measurement correctly and it could be due to the higher volume that I wound up with…a total of about 7-1/2 gallons. There’s 1-1/2 gallons of plain blonde ale and about 6 gallons of strawberry blonde (including the 6lbs of strawberries). As of late morning, the main bucket was gurgling nicely and the blow off is seeing some action, but not out of control. The plain blonde in the small bucket is just starting to see some action.

At the home brew shop, they crunched the number for me and concurred that 3 lbs of DME should put me back on target and, using some of the existing wort, will lover my yeast count a little, but will keep me from increasing the already high volume in the main bucket.

So, at home again, I sanitized a 1 quart measure and removed a gallon of wort form the strawberry blonde. I put the wort into a stock pot and brought it to a boil. I added the DME, while stirring, until it was dissolved and incorporated. Watching carefully for boil over, I boiled for 15 minutes. 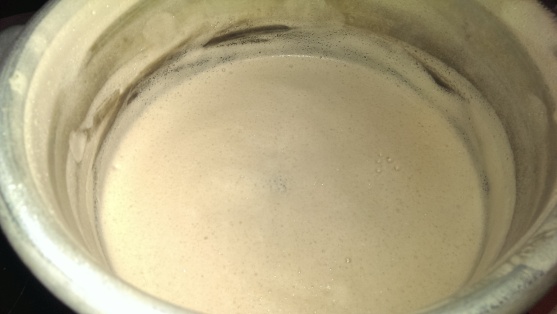 I skimmed off a few suds and then chilled the DME wort to 75F in an ice bath in the kitchen sink. 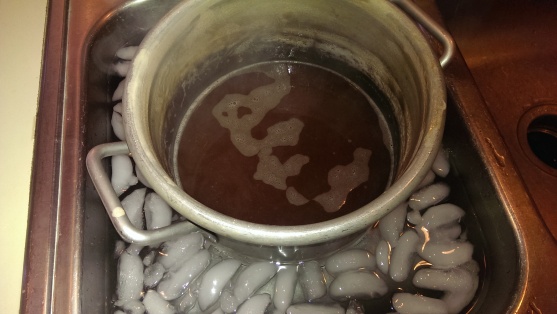 I measured the wort at 17 cups and divided that between a total of 7-1/2 gallons of wort (I just realized that I didn’t account for the gallon that I took out…dang. Shouldn’t matter too much, though.). I put 13-1/2 cups of the DME wort into the strawberry blonde fermentation bucket and 3-1/2 cups in the plain blonde bucket. The only problem is that the SG …what I will be using for my OG is still under what we worked out. It is just 1.040 @ 75F (1.041)…and I’m second guessing my abilities on the hydrometer reading thing. If I’m accurate though, and I attain the 1.010 that is estimated, then the ABV will be 4.07%. It’s not optimal, but it is acceptable. The sample looked and tasted pretty nice.

A little muddy at this point, but I think fermentation and the process will clear it up nicely.  Cleaned up and prepared for bottling my American Wheat Citra Citrus. The fermentation resumed pretty quickly on the blonde ales.

On to the bottling…all the usual bottle washing/sanitizing, equipment sanitizing. I’m using some of my newly acquired bottles. 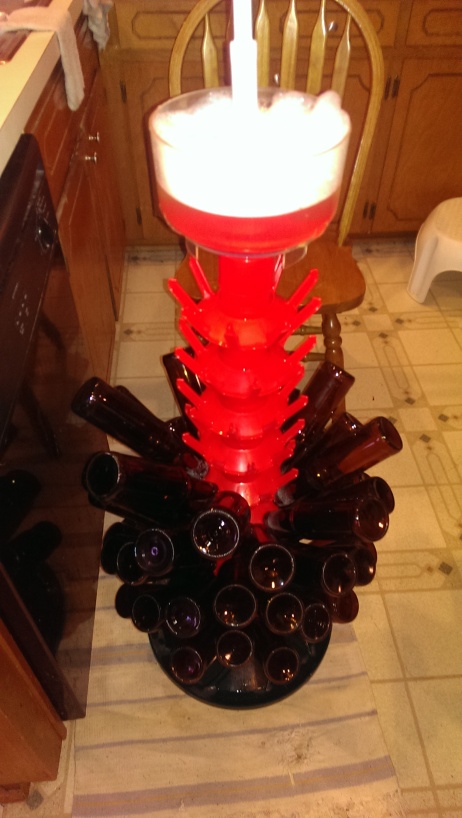 Thankfully, they are in decent boxes with six-pack holders for dividers. The box flaps and handles are in a little rough shape on some, but not destroyed…definitely usable. I could use an empty bottle box or two for the loose bottles that I have. I should ask at the brew shop if they sell the boxes only, next time I go there.

Anyway, the bottling went smoothly. I filled a case and capped it and then did the second one and capped it. I did get a yield of exactly two cases…the last bottle was a struggle. 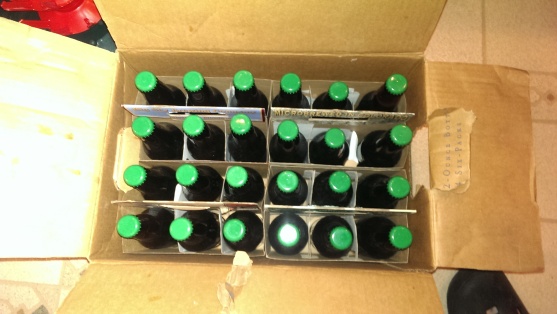 I marked it, just in case it had any trub in it. Because I racked pretty carefully a couple of days ago though, it was all rather clear.

The color looks good…a little dark, but it IS an extract recipe, so that’s expected. The flavor has a great citrus punch with a really nice hop bitterness…not overpowering, though.