Since I bottled my hefeweizen, and scrambled for bottles to do it, I have nothing brew-related going on. Everything is in the bottle conditioning phase. It just feels weird! I did open a few bottles tonight…um…just to check their progress. Yeah, that’s it. Anyway, I started off with my Nut Brown Ale that I received as a Christmas gift-kit. It was bottled 10 days ago and is surprisingly drinkable already. Compared to my previous English Nut Brown Ale, A.K.A. Fawlty Brown Ale, it is a bit more bitter. The color and clarity are good and the carbonation may get better, but is pretty good already. In addition to the kit, I also received some Irish moss and gypsum. I believe they did their jobs! No doubt that this beer will improve with another couple of weeks in the bottle, but my first bottle out of this batch says it’s a success. 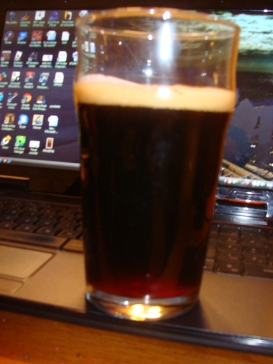 The second bottle of the evening was a 22 0z bottle of the Belgian Strong Dark. I believe my last taste of this beer was described as having a fruity component and maybe caramel, but not the roasted coffee or chocolate flavors. This beer has been in the bottle for 24 days and has since mellowed a bit on the caramel and it has lost that fruit from before. I’m not an expert at the critique thing for beer and I don’t have the right words to describe this flavor. Is this what people describe as “biscuit”? I will need to get some more experienced feedback on this one, but whatever it is, it’s good…at least, I think so! 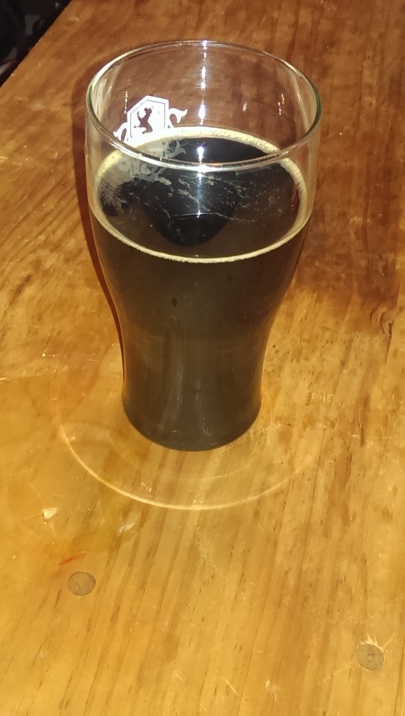 The final bottle I opened this evening is the Watson’s Cider…in honor of John Hamish Watson’s nuptials on Masterpiece Theater tonight! Side note: awesome episode. ‘Nuff said. The cider, unfortunately, is not doing so well. This is an all-crabapple (foraged) sparkling cider. This is the only beverage that I have pastuerized, so far. I also was trying to retain some sweetness by not letting it ferment quite all the way out. In the process, I did not let it clarify long enough and too much lees came along for the ride. It’s a little sour in the nose…like mild vinegar. The carbonation is a bit week. If I went back through my notes, I wouldn’t be surprised to find that the carbonation is actually going down some. There was quite a bit of sediment in the bottle and the color of the cider is a medium golden, but with a little haze. I know it sounds weird, but the best way to describe it is as if someone drop one or two drops of skim milk into the glass before adding the cider. I did have fun with the label. Since calling it a “cyser”, I have seen the error in my ways…but the labels were expensive and already printed. Plus, “Watson’s Cider” sounds like a personal question.

One of my less successful beverages, but not ready to dump it yet!

As for the flavor, I definitely get that slight sourness/vinegar taste with an almost dry finish. These days, some people think it’s good for you to drink vinegar, so they’d probably think this was really mild and tasty! I’ll keep pulling one out, now and then to see what’s happening. I’m not ready to dump it yet, but we’ll see what happens over time. If I get desperate for a few bottles to use for something else, these are at the top of the expendable list.

The nut brown ale is going to town! The blow off is working great. I don’t see anything in the tube, so I may not have needed it; however, the bubbling is less than a second apart…so, didn’t hurt. This is my first experience with Nottingham dry yeast…seems to be effective!

On the cider and melomel fronts…nothing much to report.  Added oak last night to the Pineapple Tinker. Shouldn’t have to do anything there again for a few days. The Murray’s cider is still bubbling at about a minute intervals. It’s not strong action and never has been, but keeps going. I should have rehydrated the yeast, I guess. Some is clinging in the neck of the carboy. I think I used plenty of yeast and the OG was 1.050, so I don’t think adding sugar or other fermentables would have boosted anything but the alcohol, in the long run. Again, I was going for a simple as possible to see how easy it could possibly be. Rehydrating the yeast would still be simple, but I don’t know if that would speed the process up overall…other than the initial start of the fermentation. Anyway I’m going to just let it go a few more days. I want to get it off the lees, but I don’t want to jump the gun either.

I didn’t get the wiesse beer brewed today. Brewing two days in a row?  That’s just crazy! Maybe tomorrow…just had a nagging headache today. Got some other things done off the “to do” list, though. I should be able to brew within the next couple of days.

It has been 1 month and 1 day since bottling the Fawlty Brown Ale and its carb level is perfect! Too bad I only have a couple of bottles left! My family isn’t a bunch of drinkers and they drink even less as time goes on. I didn’t have many helpers drinking my first brew at Thanksgiving…but I drank several over the course of the week. I think I’ve had one or two since then. Anyway, I’m down to four bottles just as it really hits its prime! It was tasty, but a little undercarbonated at Thanksgiving. Now, it’s just right on the carb. I’m not the educated palate that many brewers are, but I’m very pleased with this English Nut Brown Ale! I will definitely be making this one again and forcing myself to leave it alone for a month.

A month and a day since bottling is just right for this beer!

Oh yeah…the fruity bits layer on the Pineapple Tinker is starting to fall and create a layer on the bottom again. I’m assuming that this will continue and in a couple of days I will be racking for secondary. Fermenting in glass has been really interesting!

Having another Watson’s Cider…love the sweetness level and carbonation, but I really should have allowed another day or two to clarify. I was just too scared that it would ferment too dry. Instead, I’ve got more sediment in the bottles than I should and there’s a yeasty flavor in the cider. Not enough so that I won’t drink it, though!

I decided to go ahead and chill the Fawlty Brown Ale for tomorrow and try one tonight. Since we have everyone here for Thanksgiving now and no one would share the bottle with me, I won’t be surprised if most of the 10 bottles I have left come home with me. 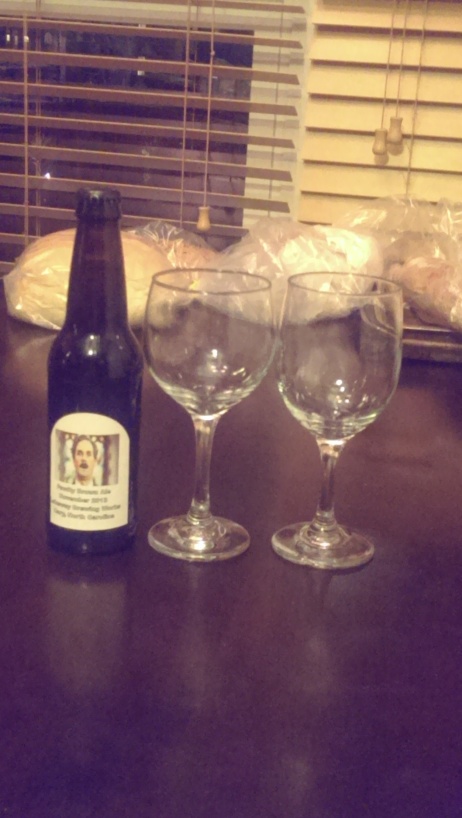 Opening Fawlty Brown Ale for a taste before Thanksgiving.

As for the beer itself, it tasted about the same as the bottle I opened several days ago. The color and flavor are good, nice bitterness, drinkable; however, the carbonation level is a bit low. 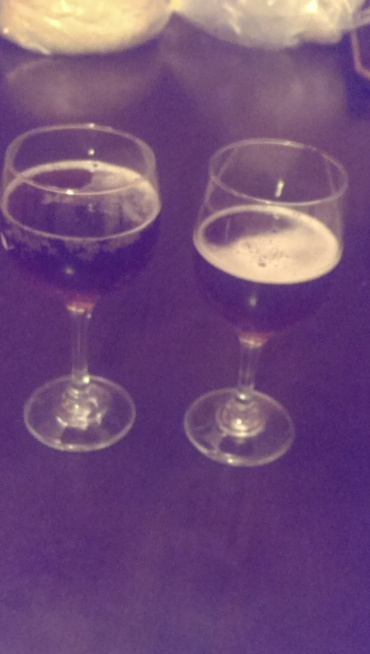 Still, pleased with my first attempt at beer and if nobody else drinks any, most of these can spend some more time in the bottle…but they’ve been refrigerated now. Not sure if I should take them out now?

After I racked my Cider batch #4 to carboys and a couple of 22 oz bottles for holding while I go to the family Thanksgiving gathering at the beach, no brew related activities for a couple of days.

At the beach…birds perched and feeding on sea oats.

I did bring my 11 bottles of Fawlty Brown Ale for Thanksgiving. It is currently at room temperature, hopefully benefiting from bottle conditioning as long as possible. I also brought my 2 brown 12 oz test bottles of cider batch#2 that I bottled on…was it 11/13/13? Anyway, stuck those in the refrigerator today and popped one tonight.

While drinkable, it was a little less carbonated than I would prefer. It is also pretty dry, but the apples are present in the aroma. Not bad.

A little under carbonated and dry, but passable!

I wavered on whether or not to open the bottles of cider batch #2 and add yeast and try to restart the fermentation process. The test soda screw cap bottle is flat and there isn’t really much apple flavor. I opened the test 12 oz bottle and think I heard the very slightest amount of release, but it tasted flat. But maybe the yeast isn’t all dead and is just slow to wake up. I decided to go ahead and label it “TARDIS Cider”. I’m just going to let it sit a couple of months and see if it ever takes off. If not, then I’ll either sweeten it and rebottle it to drink “still” or maybe try to add new yeast, sweeten, prime, rebottle and pasteurize. Not sure if option #2 is viable…I’ll do some reading and give it some time. The labels look good, though!

TARDIS Cider…it’s bigger on the inside.

9:30 pm   Cider batch #4 buckets still bubbling every 7 or 8 seconds. I  stuck the green test bottle from Cider #2 and the flip-top test bottle of the Fawlty Brown Ale in the refrigerator earlier today and I decided it was time to give the ale a try.

The top gave a nice “pfft!” when opened. The pour didn’t create a big head, but the color looked good and there was carbonation. I sipped and…it’s GOOD!!! I’m not a professional beer critic, but it’s good. Had my wife try it and she was surprised that it was so good! It’s smooth, but with a pleasant bitterness.

Pretty color, nice on the carbonation. I thought it might need more, but now, I think it was just right.

Very drinkable! I think the alcohol level is good for a 16 oz bottle …or 12 oz  bottles. Needs more carb, but I look forward to more comments at Thanksgiving!