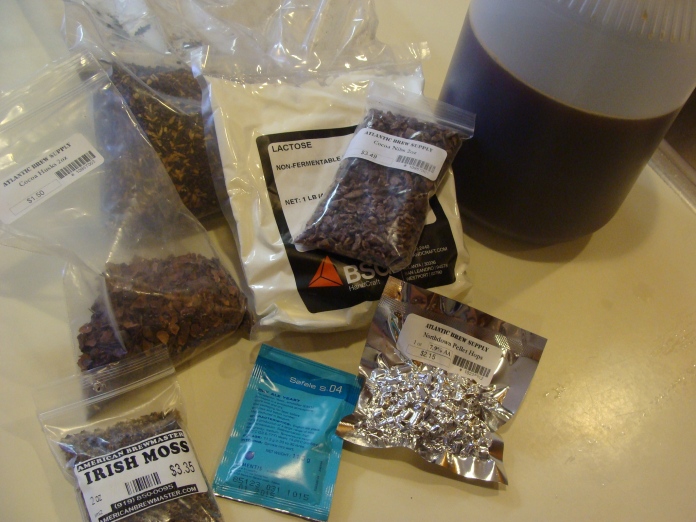 Brew Day 3/8/14   I think I am far enough along to breeze through the basic details. The basic brew went well, except I added 1 lb of lactose instead of 8 oz. From what I have heard, that should not be a problem. Maybe a slightly higher gravity. I started the grain steep with 3 gallons of water @ 155 for 30 minutes. I did do my little mini sparge set up. I used a bottling bucket with hose and gravity drained 2 gallons of water @ 168F over the grain sock. 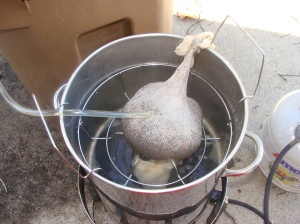 Mini sparge for the grain sock. Hey, why not?!

Boiled for 60 minutes following directions for additions. Ice bath chilled to 125F, added 1 gallon of cold water to top-off at 5-1/2 gallons. Temp was still at 100F. So I returned the bottling bucket that I’m fermenting in, to the ice bath. 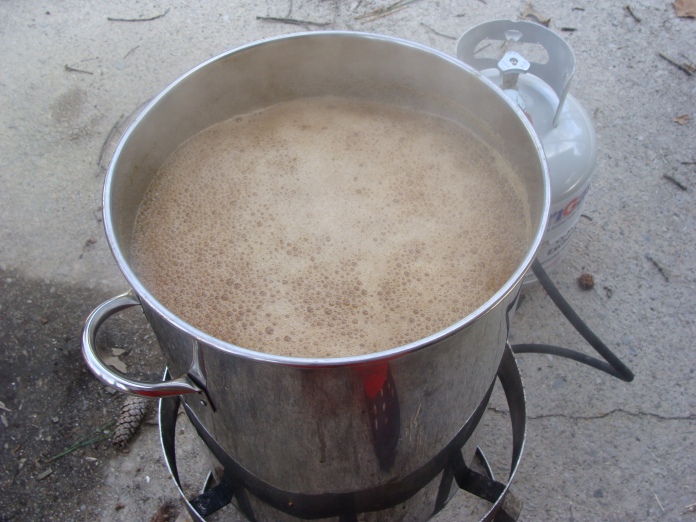 When I got it to 75F, I pulled a sample for specific gravity check and pitched the yeast (I rehydrated the Safale s-04 yeast in 4 0z of 75F water). Popped on the lid and airlock and I aerated for 5 minutes. Finished shortly after 5 pm.

I checked the OG with my new refractometer: 1.063/1.064 (those numbers are SO small!) and hydrometer: 1.060 at 80F, adjusted to 1.062…so, pretty close to each other. The original specs called for 1.053. I imagine the difference can be accounted for with the extra lactose and maybe a little better efficiency on the grain steep resulting from the mini sparge technique(?). 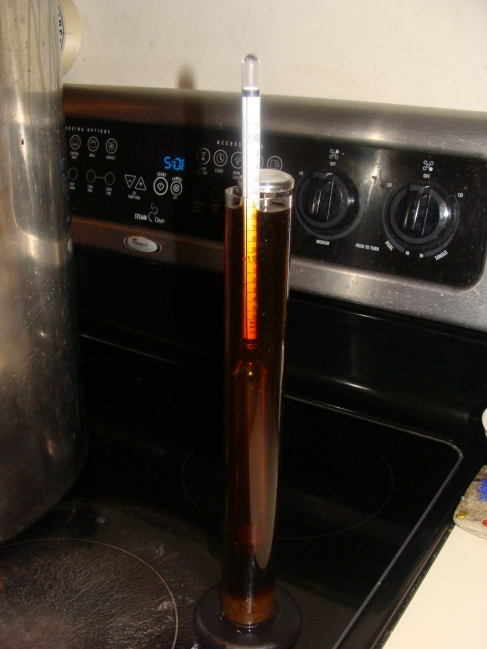 Update 3/9/13   9 p.m.   The wort began to ferment late last night and became pretty strong by this morning. I was away from the house for several hours and returned to find a very small amount of krausen in the airlock. It may not be necessary, but I went ahead and set up a blow off. I have 1 quart of cold brewed Kona blend coffee in the refrigerator. That will be added at bottling, after a secondary on Costa Rican chocolate nibs. This brew will eventually be “Costa Kona Mocha Latte Stout”. Did I mention that I love sitting here and writing and being able to hear the blow off chugging away in the next room? Yeah…love it. And having a glass of my homebrew Citra Citrus American Wheat doesn’t suck, either!

By the way, the strawberry blonde is continuing to clear in secondary. I’m thinking it should be ready to bottle by next weekend. The small batch of Plain Jane Blonde is in a plastic bucket, so I can’t see it; but I assume it is at least as clear as the strawberry. Maybe I’ll bottle that later this week, just to break things up a  bit. There’s about 6 gallons of strawberry, so that’s going to take awhile. The plain is only about a gallon and a half.

I hadn’t thought about it before now, but I’ll need to do some math on the corn sugar amount for bottling these blondes, since both are substantially off from the 5 gallon mark. 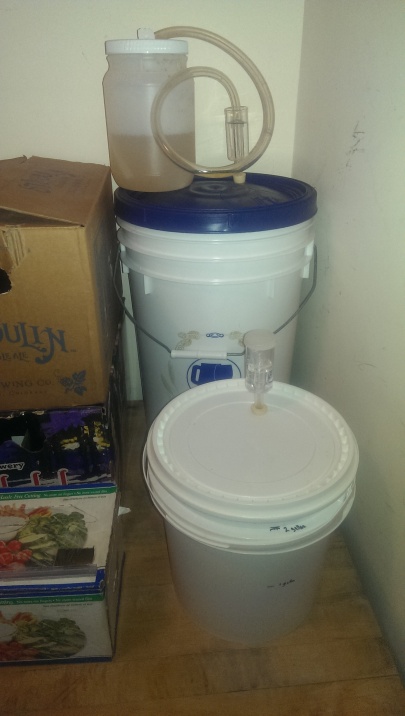 Primary Fermentation Buckets: 6 gallon with blow off and strawberries; 1-1/2 gallons plain with airlock.

The blonde ales are in primary fermentation, about 6 gals are fermenting with 6 lbs of whole, frozen strawberries with a smack pack of Denny’s Favorite #50 yeast.  The other 1-1/2 gals are plain and are pitched with an almost full package of Safale S-04. The strawberry blonde is still steadily putting off bubbles, though not as vigorously as before. 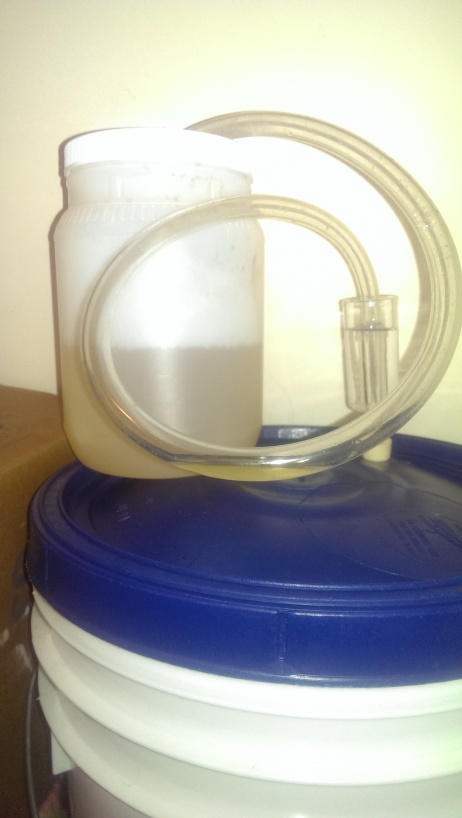 Blow off on strawberry blonde.

The plain blonde has been slow…a bubble every minute or so. I doubt that it could be that close to done, especially after the addition of the extra DME fortified wort. I’m hoping it doesn’t get stuck, but I’m keeping an eye on it and will probably need to do an SG check in a day or two.

I also did some grocery shopping today and picked up two 1/2 gallon containers of  Murray’s Apple Cider. I was so happy with my test batch of the Murray’s Super Easy Cider, that I want to make more!

At $5.69 per 1/2 gallon, a 5 gallon batch would be about $60 and I don’t need ten 1/2 gallon glass carboys…even if they ARE free. So, I may have to research alternatives…bigger containers, case prices. Something. But it IS good and DO need to make some more!

UPDATE: 2/27: A quick note…not worthy of a separate “Day” entry…but I checked the SG on the plain blonde and it is 1.014. So it has had significant movement. Maybe it’ll go down more. ABV currently is a little over 3%. I could always move to a secondary and pitch a different yeast…but the batch is so small, I really don’t want to lose much more of it to testing and racking.

Funny, I just decided I should call my pineapple melomel “Pineapple Tinker”. I have added an additional 5 oz of honey and 3 oz of white sugar mixed with 8 oz of hot water to dissolve. I added that to a 1 gallon carboy, then shook the existing juice mix and funneled it into the 1 gallon carboy. I then added another 4 cups of water, shook that and topped with the airlock. 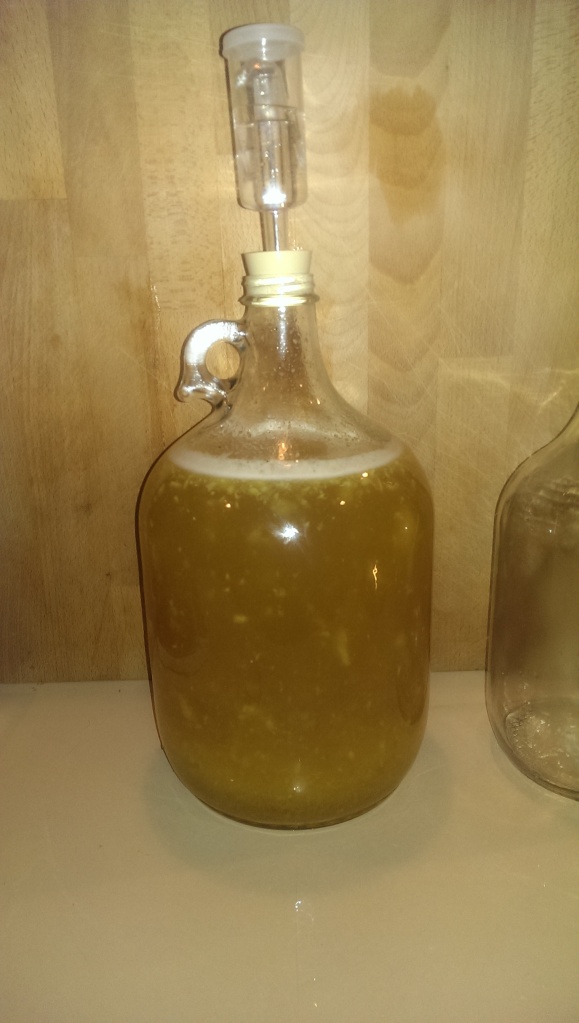 Sized up to a 1 gallon carboy for fermentation.

When this ferments and is ready for racking, I should get a little more that 1/2 gallon. I’m hoping to bottle a 1/2 gallon after perhaps a 3rd racking for clarity. This will also be my first experience with fermenting in glass, so I’ll be able to view the process. I’ll be pitching the yeast tonight. The OG is now 1.110 @69F  room temp, more like what I was expecting for this melomel. I took a digital temperature of the juice and it is currently 76F. I’m not sure if that is more accurate for figuring the OG? It doesn’t make a huge difference. The ABV calculator comes up with either 11.29% or 11.42%, if the projected FG of 1.025 is attained. I’m going to go back to my recipe builder and adjust for the fermentables that I added and see if it changes much. I added 8 oz of white sugar to the recipe calculation last night, but it was actually 3 oz sugar and 5 oz honey. Same volume, just different make-up. 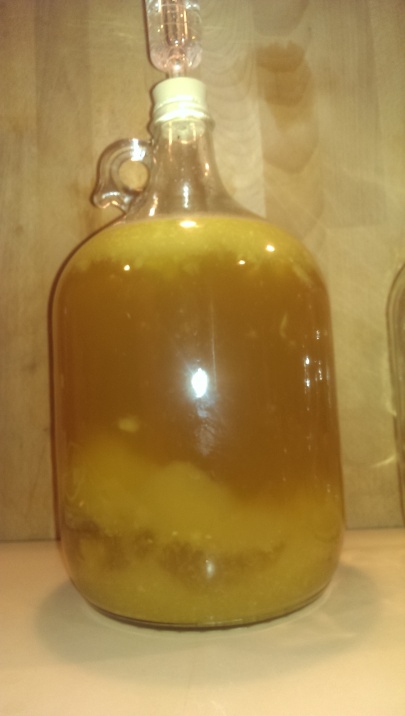 Starting to settle in the 1 gallon carboy

Oh! And the Big Dark is fermenting! I saw bubbles at about 12 second intervals. I’m going to need some bottles soon!

12:00 Checked the SG on the Big Dark stout and got a reading of 1.111 adjusted to 1.112! Holy crap!!! What happened yesterday that I got 1.047 and today, I get 1.112?! Yesterday, the wort had a good bitterness. Today, it isn’t bitter at all and is very malty sweet. I don’t know what happened, but it will be interesting to see how this ferments out and where the ABV settles. Maybe a long bottle conditioning period will be in order? 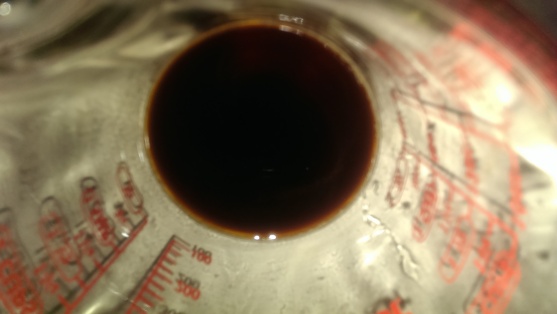 8:00 pm   Checked the SG on the Pineapple melomel at 1.142, after a good mix. Pitched just shy of 3 grams of Safale s-04 yeast that was bloomed in a little warm water. 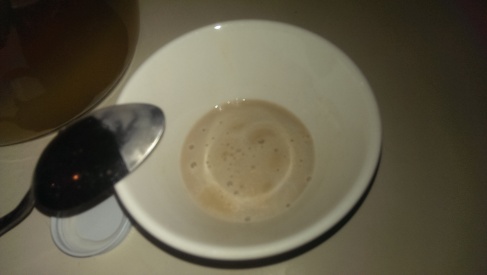 Shook up again and replaced the airlock. Let the ferment begin! 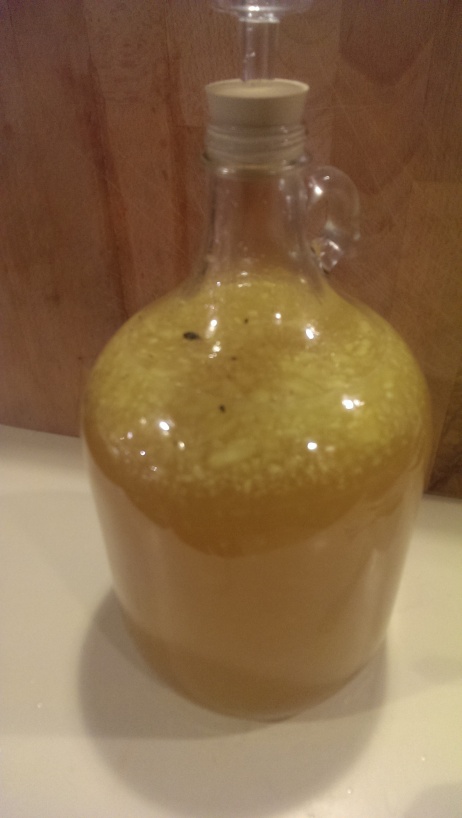 The Big Dark in PFB is bubbling vigorously. The interval is irregular, but when it goes, 3 or 4 bubbles go at once.