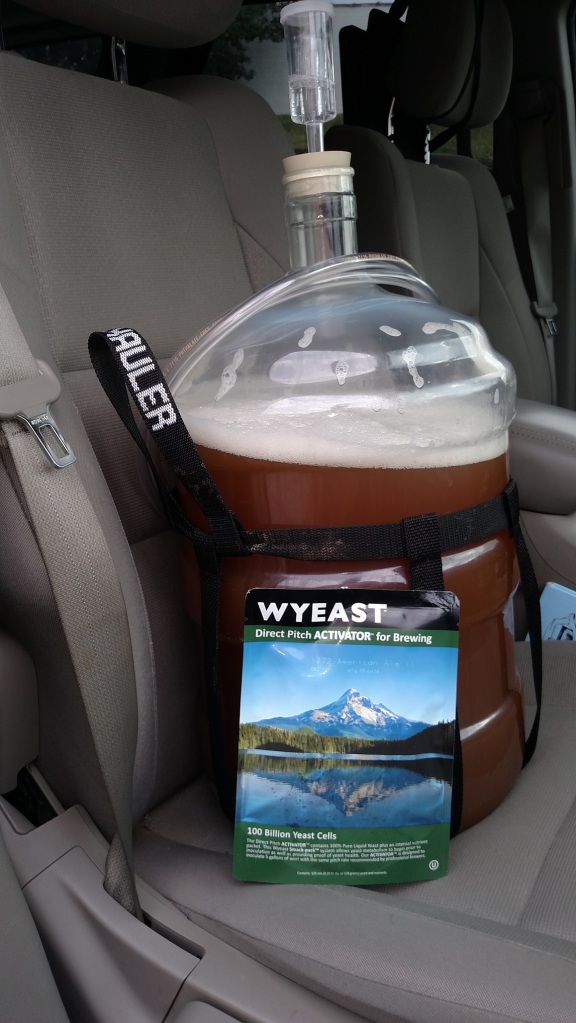 I picked up 5 gallons of free wort from Raleigh Brewing Company today…was supposed toget some awhile back, but they ran out. They were nice enough to make more specifically for the people that missed out, so I got some today! The recipe is not exactly known, but it is basically 2-row malt and a little Crystal 10L, from what I was told, with 3 additions of Willamette hops. I’m using Wyeast American Pale Ale 1272 yeast again and fermenting in the mid to upper 60’s F range. Pitched the yeast at about 3;45 pm. I’m going to keep this one simple. No adjuncts, no racking until bottling. And back to corn sugar for priming, to make sure I’m getting it dissolved well…could be an issue with table sugar priming. I think I’ll boil water to dissolve it in first and rack onto it, just to be sure the primer is evenly dispersed.

Update on Railer’s Pale Ale: kegged for the event. I put it in a friend’s keg, who will be donating to the event as well, and helping me with mine…since I know nothing about kegging. The event is Sept 24, for the Carolina Railhawks Soccer fans. “Soktoberfest”. There is a small (I hope) issue…there was a thin “skin”on top of the beer that had just formed in the last couple of days…signs of infection. It tasted okay though, and after discussing it, my friend said she would go ahead and keg it. We will keep our fingers crossed. One possible cause is that the hose I racked with was too short and allowed too much oxygen into the beer at racking, which would encourage an infection. So, I bought some longer tubing at the home brew shop today.

Update 10/8/16: Railer’s Pale Ale: A.L.E. decided that, despite the fact that this event has been done for 3 years, this year they won’t allow it. “Homebrew beer is for at home.” So, now I have about 4-1/2 gallons of beer with no plans, and it’s kegged at a friend’s house. No idea what to do with it. Probably bottle a little bit from the keg and screw the rest. I have too much taking up space as it is. And, in the fermentation chamber, the wort I got two months ago from Raleigh Brewing Co., seems to be continuing to ferment. WTF?! Possible infection, but it tastes okay and there’s no pellicle…just some bubbles. It’s a little bitter for a pale ale, but otherwise okay. I wasn’t planning on messing with it, but it might benefit from some dry hopping with something like Citra, to cut that bitterness and give it a little more aroma and flavor. At some point, I may have to cold crash it…worried about priming/bottling and creating bottle bombs…Hell, I may just dump  it and skip brewing for awhile. Maybe get some new hardware and reduce the threat of infections via tubes, siphons, buckets, carboys, etc., that I’ve had for a few years now. I was excited to get the fermentation chamber set up, but nothing has really been successful in awhile. Kind of depressing. I feel a purge coming before I brew again.

Update 10/18/16: Free pale ale wort from Raleigh Brewing: Racked to new carboy. Not clear at all, but it’s at 1.002 SG, so it’s probably done…just not sure, since it took so long and still had bubbles on the surface. OG was 1.053, according to the brewer, so that would make the ABV 6.69%. Looks and smells okay. Still bitter and not very  “interesting”, so I’m going to let it sit for a week or two and then dry hop with some Citra and maybe some Cascade. Should I put some “holiday spice” in it? I don’t know….

Tried a bottle of the Fluffernutter Sammie Stout a couple of days ago. There was no head…like pouring a soda with no ice. It bubbled when pouring and immediately dissipated. The carbonation is better than last try, but could still be better. I’m hoping this isn’t the best it’s going to get, or I’m disappointed. Flavor is not bad, but would certainly be more enjoyable with head and a little more carb. Maybe I just need to try another established recipe, without doing anything “interesting” to it. I might just do better with an ESB.

The Railer’s Pale Ale is coming along nicely. The Wyeast II 1272 yeast has performed very well…nice krausen, but no need for a blow-off tube. At this point, I think fermentation is done; but I’m giving it a little more time. I may take a hydrometer sample soon to start the verification process. I’m hoping to be able to keg this beer, with equipment belonging to a friend, for the Railhawk’s Soktoberfest event September 10th. The whole Cascade hops are floating …at least some of them. I’m hoping they will drop, but either way, I’m planning to rack to another carboy, using a strainer bag on the siphon. I’m optimistic with this beer…as long as it isn’t too sweet…but it will be consumed.

I just wish I could pull off a good stout with a nice head.